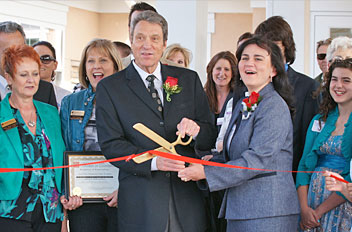 A formal proposal for the 65,000 square foot medical office building at Castagna Commerce Park on Route 22 was approved by the Town Planning Board at the public information meeting on Aug. 18.

The team of consultants representing the joint venture of Castagna Realty Corp., Inc. and the Westage Companies presented the proposal that was followed by a two-hour discussion before the approval was granted.

Since Castagna Realty Co has already concluded the environmental review process by completing the (SEQRA) State Environmental Quality Review Act), the Planning Board was primarily concerned with the aesthetic effects of the building on the community and had conducted a review of the site conditions including having balloons deployed on the east side of Route 22 to simulate the intended height of the new building.

Only two questions were asked during the public comment portion of the meeting. The first question concerned whether there will be any intent to use solar energy for the building. While the new building does not yet have plans to use solar energy, the chief architect of the project, Paul Varanouskas, assured the Planning Board that they have not ruled out that possibility.

As for the second question concerning ownership of the sewer lines hooking this facility to the present sewer district, Planning Board Chair BJ Yankovich said, “(we) do not have the inclination to determine whether the private ownership of the sewer lines by Castangna would affect future sites.” It was determined that issue properly belongs before the Pawling Joint Sewer Commission.

Varanouskas reviewed some of the engineering and energy-saving designs of the new building. He said that there will be an abundance of earth tones to blend with the environment and the sides of the building shell will be enclosed with various materials including brick and EIFS (an insulating and water resistant material). Instead of a broad uni-surface exterior, the building will be decorated with dividing apartment style trim to present a more residential appearance. A limited amount of curbing will be used to allow for storm water run-off and retain the storm water entering the basin in front of the building. A stop sign-controlled entrance will be used for the site but the possibility of another traffic light may be imposed by the NY State DOT.

Dennis Palmer Plumbing and Heating was also approved to move into the old Pawling Ford Dealership. This business had few complications in attaining its board approval because only minor changes will have to be made to the existing property. Several waivers were submitted by Palmer and approved by the board which omitted the need for Palmer to submit topography and lighting maps because the existing infrastructure and lighting systems will be re-used. This resulted in the fairly quick approval given. The next meeting of the Pawling Town Planning Board will be on Monday, Sept. 8, at 7 p.m. in the town hall.