Getting to yes in the ‘land of no’ 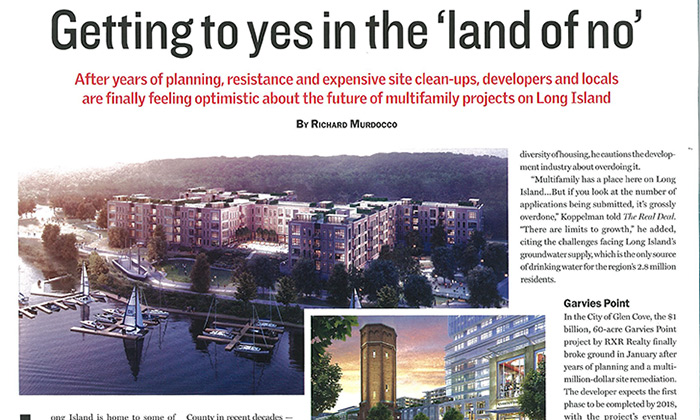 After years of planning, resistance and expensive site clean-ups, developers and locals are finally feeling optimistic about the future of multifamily projects on Long Island. Long Island is home to some of America’s oldest bedroom communities, and for many, the prototypical definition of what it means to be “suburban.” With a strict preference for low density development across Nassau and Suffolk counties, Long Islanders have long shunned any project they perceive as bringing “Queens-like” density to their neighborhoods.

But recently, Long Island communities — many of them, anyway — seem to have changed their tune, and are now looking to transformative real estate growth that reflects shifts in market tastes and can help grow the local economy, create jobs and retain residents both young and old.

Experts say the shift happened largely because of economic conditions. The healthy economy has given more buying power to young people who prefer urban-style living.

“There is growing amount of multi-use development close in to commuter lines, and this is beginning to look like a long-term trend. Consumers from the city are already used to multifamily living in co-ops, condos and rentals, and therefore are comfortable with it in the suburbs,” Miller said.

Developers are seizing the opportunity for growth, with projects ranging from the creation of an intermodal hub in Ronkonkoma — one of the biggest projects pitched within Suffolk County in recent decades — to Heartland Town Square in Brentwood, the largest development effort in Long Island’s history.

“There are so many places that this is happening — Lindenhurst, Huntington Station, Glen Cove…It’s the wave of the future,” said Bruce Edwards, president of the Ronkonkoma Civic Association. Although the group originally objected to the Ronkonkoma Hub, it is now working with developers on the project.

It has not been an easy road for any of these projects, however. “Originally, there was no acceptance of multifamily on Long Island — period,” said Lee Koppelman, a former regional planner for Nassau and Suffolk counties who is now the executive director of the Center for Regional Policy Studies at Stony Brook University. “Whenever it was proposed, residents would form civic organizations and oppose it.”

Local real estate industry players say that it’s that NIMBYism that led to the area’s nickname “Land of No,” though it’s started to cool, allowing for the spate of urban-style development.

While Koppelman agrees on the need for diversity of housing, he cautions the development industry about overdoing it.

“Multifamily has a place here on Long Island…But if you look at the number of applications being submitted, it’s grossly overdone,” Koppelman told The Real Deal. “There are limits to growth,” he added, citing the challenges facing Long Island’s groundwater supply, which is the only source of drinking water for the region’s 2.8 million residents.

In the City of Glen Cove, the $1 billion, 60-acre Garvies Point project by RXR Realty finally broke ground in January after years of planning and a multi-million-dollar site remediation. The developer expects the first phase to be completed by 2018, with the project’s eventual completion in 2022. The final project will eventually include more than 1,100 apartments and condos, as well as a restaurants, retail and public park space. Pricing on the units is not yet available.

Garvies Point had a long road to approval, partly due to the environmental hurdles. Part of the proposal required building on plots of land that were EPA-designated Superfund sites, which cost millions of dollars to clean up. Lawsuits were also an issue. Glen Cove residents, as well as some from the nearby Village of Sea Cliff, registered multiple concerns in the courts about the project’s impact on the community, as well as the toxicity of the land. The challenges were dismissed in August 2016, paving the way for the mixed-use project to proceed.

The industry points to Garvies Point as a prime example that now, large mixed-use projects of regional significance can be built on Long Island — it just takes a bit of time.

Nowhere on Long Island is the pressure to boost tax revenues more pressing than in the Town of Oyster Bay, centrally located in the heart of Nassau County. Thanks to fiscal mismanagement and a series of high-profile political scandals, the township’s coffers are essentially depleted, and Standard & Poor’s has downgraded the town’s credit rating to junk status. That means local officials are finally open to development ideas that will increase tax revenues.

The current proposal includes 625 residential units, complete with 355,000 square feet of retail and 200,000 square feet of office space, all to be built on 93 vacant acres. Finer points of the plan include “two business-style, boutique hotels” with a total of 325 rooms, 65,000 square feet of restaurant space and 35,000 square feet of “entertainment/theater offerings.”
The housing will be mixed and consists of condos, townhouses and some full-size single-family homes. The project has no plans for rentals, and prices are projected to be market rate for the township, although specifics aren’t yet available.

As part of the project, the developers are also working to convert a former town landfill to a 30-acre community park. Most of the project’s buildings will be one to three stories, according to local reports, with some taller structures near the Long Island Expressway. If approved, the project’s final build-out is expected by the end of the decade.

The site has a complex history, and other development plans have been thwarted over the years: A proposal from Michigan-based Taubman Company for an upscale regional shopping mall on 39 acres of the site failed after years of resident and municipal pushback and delays. Taubman bought the site for roughly $160 million in 1994, and oversaw a costly cleanup. But the project was stymied when Simon bought adjacent land, and Taubman eventually sold the property to Simon in January 2014 for $60 million.

The town and developers have said the land is now suitable for development. But because of lingering concerns about the contamination, as well as the long-time aversion to this kind of project, the developers have taken extra care to involve both the township and local civic leaders in the creation of Syosset Park.

“What we’re proposing, because it’s on such a large piece, it’s going to have a village scale to it,” John Gutleber, president and CEO of Castagna Realty, told Long Island Pulse Magazine in an August 2016 article.

The development team echoed that sentiment on the project’s Facebook page, writing: “We have devoted a great deal of time to listen to the needs and desires of local residents…We promised that its plans would not be anything like the mega-mall that was previously proposed, and be thoughtfully integrated with the community.”

Representatives from the development team told TRD that they are finalizing the project’s Draft Environmental Impact Statement for public and municipal review, and they didn’t want to disclose any additional information separate from public reports already issued at this time.
The document is likely to be submitted to the Town of Oyster Bay in spring 2017, with a public comment period to be held shortly thereafter.

The concept of the Ronkonkoma Hub, Tritec Real Estate’s mixed-use project to be situated on 52 acres near the LIE and one of the busiest LIRR commuter hubs in Suffolk, has been kicking around in development and planning circles since the 1960s.

“The hub is a project that was initiated by the community, in particular the civic [groups] and chamber of commerce,” said Bob Coughlan, a principal at Tritec. He said “we’ve seen a change” regarding denser real estate projects on Long Island, with new interest in areas that may have once rejected such projects.

“More communities view it as a positive, that these types of project are essential for survival and growth,” he said. Setauket-based Tritec has spent years working with Suffolk County, as well as both the towns of Islip and Brookhaven, to make the Hub happen after the firm was named the master developer of the site in August 2012.

Tritec is proposing 1,450 apartments, 360,000 square feet of offices and 195,000 square feet of retail for the hub. The $700 million project is expected to break ground on its first phase, consisting of 489 residential units, in spring 2017. Phase two, the core downtown area, is expected to begin in 2018, with the firm estimating that overall completion of the Hub will take a decade. Pricing on the residential units has not yet been decided.

“It’s truly at the intersection of road, rail and air,” Coughlan told TRD. “Demand has been increasing significantly over the last eight and nine years. In general, connectivity seems to be more in the focus of the public.”

While concerns over density and the scope of the project still linger, local businesses and civic organizations have expressed their support. Ronkonkoma Civic Association’s Bruce Edwards told TRD that the group has now accepted that the project is happening, and it’s been working with the developer to mitigate any potential negative impact.

“Rather than be told what’s coming, we want to be part of the vision,” said Edwards, adding that meetings with Tritec officials eased his concerns. “They’re good neighbors. The density is too high, but it is what it is.”

Jerry Wolkoff and his son David, the team that developed Heartland Business Center and (controversially) the former 5Pointz site in Queens, are working to transform 452 acres in Brentwood into the largest mixed-use development in Long Island’s history. Heartland Town Square would cover a total of 15.5 million square feet, an effort with a potential price tag of $4 billion.

The proposal includes 9,130 housing units, the majority of which the developer says would be rentals, alongside some condos. All units will be priced at what the developer calls an “affordable market rate.”

The Wolkoffs have been trying to get the project built for more than 14 years since purchasing the property — once part of a larger campus of the psychiatric hospital Pilgrim State — in 2002. During that time, they have tussled with the town over the project’s size and density, causing years of delays. Only recently have things begun to move forward for the project.

In August 2016, the Islip Town Planning Board granted approval to Heartland’s first phase, which would impact roughly 133 acres of the project site. In February 2017, it cleared another significant hurdle thanks to the Suffolk County Planning Commission’s unanimous recommendation for approval to the township, with conditions that addressed ways to mitigate Heartland’s impact on traffic and local schools, as well as on area groundwater tables.

The next step is securing final approval by the local Town Board with accompanying public hearings. “Now Long Islanders themselves are learning how important these types of developments are,” Jerry Wolkoff said. He stressed to TRD that unless something like his project is built, Long Islanders will “lose the young, who will end up going into Queens or Brooklyn.” And the builder warned that without more housing options, empty nesters may flee to Georgia or Florida.

According to Koppelman, however, the lack of detail regarding mitigation against the project’s impacts is “why it’s been sitting around for over a decade. As of right now, it shouldn’t be approved,” the planner told TRD.

Despite the delays, the Wolkoffs feel the area’s reputation as the Land of No has shifted.
“We now feel things are in our favor. Long Island is ready for this type of development,” David Wolkoff said.