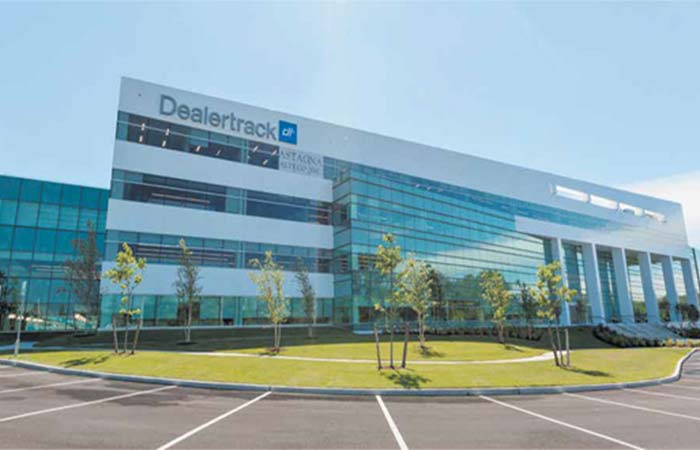 The $120 million project is the largest new single-tenanted office complex built here in the last decade and boasts amenities aimed at attracting a talented workforce, including a basketball and volleyball court, game room and fully equipped gym.

Built on a 9-acre site on New Hyde Park Road, the Dealertrack headquarters project is a partnership between Tritec Development and Castagna Realty.

Dealertrack, which provides data access and inventory management software for automotive dealers, had kicked the tires of sites in five states, as well as a few other locations nearby, including the Lake Success space that Canon USA vacated in the spring of 2013.

Ultimately, Dealertrack decided to have a building designed for them and built from scratch. In 2015, the company was acquired by Atlanta-based Cox Automotive, a division of Cox Enterprises–which also owns vehicle-marketing platforms Kelley Blue Book and AutoTrader–in a $4 billion deal, but Cox committed to sticking with the North Hills project.

“We looked at existing buildings and didn’t really find anything,” said Dean Tilsley, senior vice president of finance and operations for Dealertrack. “There’s a shortage of really modern Silicon Valley-style buildings and facilities that we were looking for. That’s why we ended up building our own.”

Don Catalano, owner/broker of iOptimize Realty which represented Dealertrack in the North Hills lease, said they conducted “an intense multi-year search” looking at existing buildings and proposed sites on and off Long Island for Dealertrack.

“Dealertrack needed an iconic and ultra-modern facility that reflected their work in software development that would help them recruit top programmers,” Catalano said. “Because of the help provided by New York State and Nassau County economic development agencies, we were able to make this unique location on Long Island a plausible reality.”

Dealertrack received more than $45 million in economic incentives from the state and the Nassau County Industrial Development Agency in exchange for its pledge to add 350 jobs in the next few years. Currently, Dealertrack employs nearly 600 people at its leased space at 1111 Marcus Ave. in Lake Success. The new North Hills headquarters can accommodate up to 832 employees.

“The millions of commuters that will see the Dealertrack headquarters every day, whether they realize it or not, are given the impression of how vibrant the Long Island economy can be and that Long Island companies are still capable of creating great things,” Coughlan told LIBN. “It takes companies like Dealertrack to create an environment supportive of a vibrant workforce that will invest in the type of building to keep that workforce here.”

Dealertrack signed a 17-year, triple-net lease for the entire building, with rent that starts at $32.50 a square foot and peaks at about $48 a square foot by the end of the lease term.

The rent that Dealertrack is paying is near the top of asking rents for Class A office space here, but Tilsley said the company pays even more for office space in California’s Silicon Valley and considers it a bargain compared with New York City.

“Long Island is very affordable relative to Manhattan,” Tilsley said. “So if we look at the price per square foot fully loaded here, it’s easily a third to a quarter of what it would be fully loaded in Manhattan in a Class A building.”

Dealertrack will move into its new digs between July 7 and July 17 and the company will continue to offer its employees free shuttle service from the New Hyde Park and Mineola Long Island Rail Road stations.

“We look forward to Dealertrack being a long term tenant that continues to grow and prosper and we are committed to assisting with managing and maintaining the property according to our high standards and long history of excellence,” Castagna Realty CEO John Gutleber said in a written statement.

The primary reason for building its own custom complex was to lure millennials. Tilsley says the new complex is likely to eventually be utilized for other Cox divisions as well.

“New York has got an amazing depth of talent. You go into Manhattan and you’ve got a lot of big tech players because of that talent, so we’re competing with that,” Tilsley said. “You spend a big part of your week in the work environment and we want our team members to look forward to coming to work and be excited about coming to work. We’ve tried to create a space that matches our culture as far as innovation and collaboration, along with overall health and wellness.”