How Long Island is setting the standard for “going green” 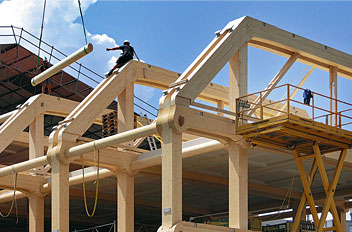 If you have been watching the news or reading the paper, you’re sure to have noticed that the latest trend is “going green.” Various industries have been making news by “going green.” Computer companies such as Hewlett Packard, car companies like BMW and giants including General Electric have all decided to join the “green” movement. It was only a matter of time before the real-estate industry caught on. But what do all those pictures of flowers, lakes and crystal clear skies mean?

In simple terms, “going green” means reducing the amount of energy and natural resources being consumed. In the real estate industry, the largest expenditure of energy and natural resources is office buildings. According to the U.S. Green Building Council, each day in the United States office buildings account for 42% of total energy consumption, 65% of electricity consumption, 40% of greenhouse gas emissions, 30% of both raw materials waste and landfill waste and 12% of potable water consumption. “The energy you use to light the space that you’re in, the computer itself, the heating and cooling systems, all those systems are running,” says Bob Rose of the U.S. Environmental Protection Agency.”

The Environmental Protection Agency estimates that if each building owner took on the challenge to become green, by 2015, Americans would reduce the greenhouse gas emissions by amounts equal to the emissions from 15 million vehicles, while saving $10 billion. These undeniable facts and statistics jumped off the pages and inspired change through action. Some of the largest names in Long Island real estate have taken huge leaps in an effort to be more “green.” From developers to landlords, Long Island has put itself on the map when it comes to “going green.”

In 2003, Russell Albanese of the Albanese Organization together with Castagna Realty, the owner of Americana Manhasset shopping center, ventured to modernize an existing office building into the first green office building on Long Island. 1001 Franklin Ave. in Garden City set the standard for green buildings and revolutionized the future of Long Island’s commercial structures. The building features recycled and natural materials including stone floors and recycled furniture fabric. Rainwater is collected and stored in a 5,000 gallon tank in the basement supplying water to irrigate the landscaping of the building. A state-of-the-art HVAC system reduces power use and features a high-quality filtration system designed to catch dust, pollen and impurities. The paints and adhesives used throughout the building are also environmentally responsible. Even the cleaners used to keep up the building are ammonia free and peroxide-based instead of chlorine reducing the amount of pollutants being emitted into the air. Every detail of 1001 Franklin Ave. is carefully designed to minimize the building’s environmental impact.

Since 2003, many of Long Island’s landlords have been making similar upgrades and changes to their buildings’ structure and function. Long Island realizes that it is equally as important to build a green building as it is to operate it responsibly. Strict recycling programs have been implemented in buildings such as 600 Old Country Rd., owned by Vincent and Michael Polimeni. In addition to the new recycling program, new burners have also been installed to alleviate energy use. Improvements to existing structures are the key to ensuring an environmentally conscious Long Island.

Aside from implementing changes to existing structures and building new office buildings from scratch, Long Island has been flooded with new ideas on how to solve the dilemma of environmental sustainability. Vincent Polimeni has proposed building a tunnel to connect Syosset on Long Island’s north shore and Rye in Westchester County. The proposed project will save an estimated 24 million gallons of gas per year and reduce air pollution by 16.7% throughout the entire North Eastern region. Donald Trump has proposed building a green restaurant to replace the recently demolished Boardwalk Restaurant in Jones Beach. RexCorp’s Scott Rechler continues to introduce energy saving technologies in office building construction on Long Island. Rechler is also one of many Long Island developers who contribute to scholarship funds aimed at promoting a new generation of forward thinking Long Islanders.

With thousands of commercial properties on Long Island, the opportunities to build green are limitless. Revolutionary thinkers and ideas are the key to promoting a healthy and sustainable environment. Long Island’s future depends on innovative thinkers. Judging by the recent surge of environmental initiatives, commercial real estate on Long Island is sure to flourish in a responsible way.