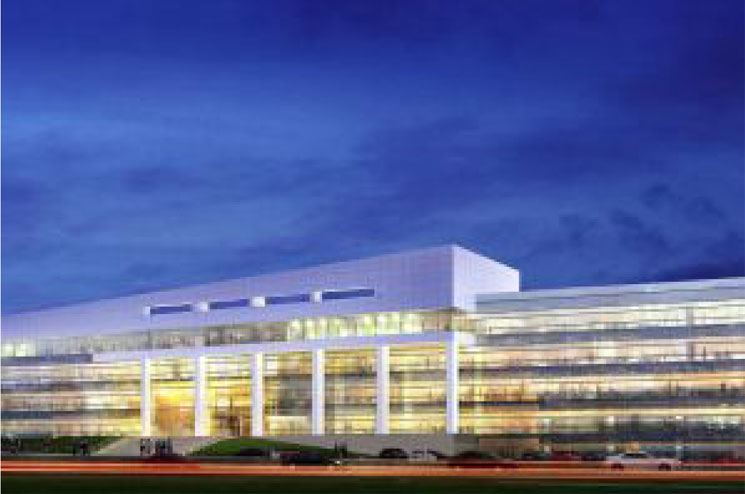 Plans have been unveiled for the new North Hills headquarters of software company Dealertrack Technologies Inc., a building that will include a rooftop vegetable garden and an LED screen wall 65 feet long.

Construction of the 233,000-square-foot, four-story office building is expected to be completed in late summer 2016 at a cost of $112 million. TRITEC Real Estate Co. and Castagna Realty have partnered to handle construction and will lease the space to Dealertrack.

“There hasn’t been a new trophy-quality office building built on Long Island probably since the ’08 recession hit,” said Jim Coughlan, a founding principal of TRITEC. “This is a great sign for Long Island and the local real estate market.”

Designed by Woodbury-based architectural design firm Spector Group, the new headquarters will feature a three-story atrium, indoor fitness center, 125-seat auditorium, and a rooftop flower and vegetable garden for employees to grow their own produce.

The construction site, owned by Castagna Realty based in Manhasset, is regarded as one of the prime pieces of commercial real estate in Nassau County, but it has remained undeveloped despite attempts in the past to use the location. Previous plans for the 10-acre property, which sits near the Queens-Nassau County border overlooking the Long Island Expressway, have fallen through.

“We’ve designed multiple buildings for tenants for this site over the years,” said Michael Harris Spector, founding principal of the architecture firm. Dealertrack’s new office is the first to make it this far, and Spector said the finished headquarters will represent part of his “legacy.”

Because of its location and visibility, “it will basically be a high-tech billboard for Long Island,” added Coughlan.

Castagna and TRITEC have already cleared the site, excavated and worked on drainage for the new building, and they plan to begin work on the foundation of the building before the end of the year.

Dealertrack, now based in Lake Success, reported $225 million in revenue for its second quarter ended June 30. The fast-growing company makes programs for automobile dealers to improve efficiency, and currently employs nearly 400 people on the Island.

“The building is going to allow us to better accommodate the employees and the growth of the company,” Dealertrack spokesman Michael DeMeo said.

The company had considered moving off Long Island. In August the Nassau County Industrial Development Agency granted Dealertrack $18.7 million in tax breaks in return for its promise to stay and add more than 350 jobs.